This is a brownie recipe recently added to my collection and I am smitten. My mom made these brownies for my birthday this year.  She said she wanted to bake for my birthday but that she knows Dave enjoys the tradition of making me a birthday cake.  (I enjoy this tradition too!)  I suggested she make brownies or cookies since I love those too, and why not have brownies and cake!
She ended up making cookies for dessert on the night we ate together for my birthday a few days before my actual day.  They were chocolate chip with pecans- one of my favorites.  They were beautiful and delicious! Then on my actual birthday, my dad came to a meeting on campus and surprised me with a plate of brownies (cut heart-shaped) and topped with chopped pecans.  They were amazing! There were too many for me to take home (since I knew cake was going to be at home), and not enough to take to class to share with my students.  So I shared them with my colleagues.  They were glad I did.
Tanya, the custodian who cleans our area, happened to be in the office at the time and I offered her one.  She gladly accepted.   A few days later I saw her in the hall and she said it was the best brownie she had ever had, and that she had saved part of it to share with her twin sister, Tonya.  (Yes, they are twins named Tonya and Tanya. She told me that it was the labor and delivery nurse’s idea to name them one vowel different when her mom had twins that she wasn’t anticipating!) According to Tanya, Tonya LOVES  brownies.  She said Tonya didn’t believe that the brownie was not from a bakery. She asked if she could buy some from my mom! I said, “You can’t buy them, but I will make them for you and give you the recipe.” 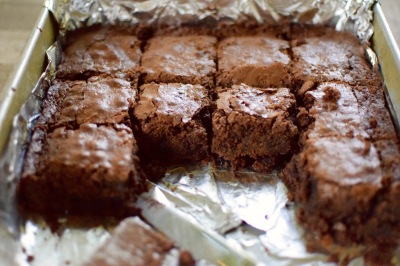 I called my mom and told her how much we enjoyed them and asked for the recipe.  I went ahead and made a few copies of it when she passed it along.

A week or so later I made a batch and brought a box of them to work for her.  I couldn’t find her in the halls so I left it on my desk with the recipe and a note, as I knew she would come early in the morning to collect trash from my office. I ran into her several weeks later and she told me that they have been making this recipe a lot since I passed it along. So fun.

This recipe is from The Southern Living SEC Tailgating Cookbook.  and has a side bar that says, “Go ahead and copy the recipe to give to friends at your tailgate.  They’ll be asking for it.” I think they are right.  They are chewy, thick, rich and lovely.  What sets them apart from other brownie recipes I make are brown sugar, unsweetened baking squares, and lots and lots of butter (not that this part is unique to this brownie recipe).

Bake at 350˚ for 40 to 44 minutes or until a wooden pick inserted comes out with a few moist crumbs.  Let cool completely on a wire rack. Lift brownies from pan, using foil sides as handles.  Gently remove foil, and cut brownies into 16 squares.
(Note: this makes a 8 inch square pan, which I thought seemed small, but found that they are rich and thick! I have, however, doubled the recipe a few times when feeding a larger crowd.  This really spotlights the amount of butter, sugar and chocolate are in these lovely brownies!)
I am thankful when sharing a baked good and recipe can connect people to each other. You might want to make a batch and take them to work, or pass them to your neighbors (or tailgate- if you are are tailgater), and show some love via butter, chocolate and lots of sugar! And be ready with the recipe to pass it along.