Ruth Williams was my paternal grandmother. She was a classy lady.  She did things with style.  My mom credits her (her mother-in-law) for teaching her to celebrate the holidays with intentionality and creativity. My grandmother had some great traditions. One of them was what she called “heritage gifts”.  As they were down-sizing in their later years, my grandparents started handing things down to us.  The lovely approach they took was to select things of theirs that they no longer wanted, needed,  or they no longer had room for, in their smaller condo. They would then decide who was the best recipient of these items and then she would type (on her typewriter) a fun note to go along with the gift, explaining the origin of the gift, the story behind it, and why it was being given to that particular person. I loved that it was a creative, intentional way to clean out the attic, and endow people with their “treasures”. (Granted, some were more treasured than others). 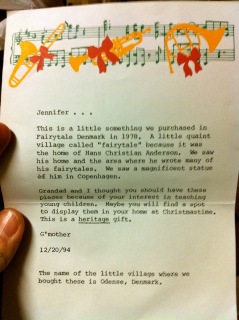 Another gift she passed along was Ham Balls. Never in my life have I ever been served a ham ball outside of my grandmother’s or my mother’s home. Yet they are a favorite special savory treat.  When my parents got married, my dad brought a few recipes into the marriage hoping my mom would adopt into their new home and this was one of them.  They are meatballs, but made of a pork/ham combination baked in a sweet and tart glaze.  My grandmother made them many times when we would travel to see them.  We would arrive at dinner time and en route we would “guess” whether or not we would have ham balls for dinner. And most all of the time we did!

Mix meat together with spoon. Add bread crumbs eggs and milk. Mix thoroughly. Roll into balls. In a bowl mix together sauce ingredients until sugar is dissolved.  Place ham balls in shallow pan, pour sauce over. Bake at 325˚ for 30 minutes, or until fully baked and have a nice firm edge.

Raw ham balls may be frozen and used a few at a time.
Yields about 50 balls.

*I only had 1 cup of plain bread crumbs when I made the recipe, so I made the second cup by toasting some whole wheat bread and crumbing it in the food processor. 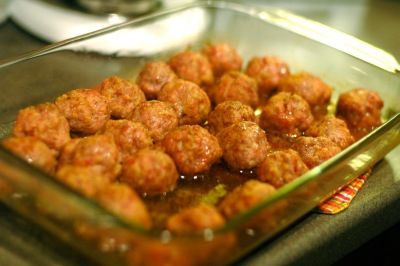 I made them this week, so that I could make sure I had the recipe clear before posting them, and to get some photos. My family was so excited.  I told Dave I felt like I was channeling my grandmother, and should be wearing pumps, a silk dress and my apron as I made this dinner instead of the yoga pants and hoodie I had on. It was a very “Ruth” meal. If only I had made a congealed salad to go with it (served on a lettuce leaf on a salad plate)!

My family LOVES ham balls. They have really great flavor and it’s fun to have something different! It makes 50 or more, so you can freeze some of them to bake at a later time.

My mom had warned me that the trick of this recipe is that you have to have a butcher at the grocery grind the ham, as ground ham is not usually readily available. Some butchers won’t do this because of the risk of contamination with their grinders.  I went to Publix, as my first stop, and they were super helpful and had the meat ground, packaged, and ready for me in just a few minutes. He said they have a separate grinder for speciality meats and since ham is fully cooked and bought in the store, it is not a contamination risk. The ground pork is already ground and prepackaged in our grocery.

Whip potatoes in butter.  Add remaining ingredients and best until fluffy. (Add more milk if needed). Place in buttered casserole.  Bake for 30 minutes at 350 degrees. Stir once while baking. (May be prepared a day in advance and baked before serving.)

Another gift my grandmother passed along was the idea of tins of goodies filled with baked goods- candies and cookies for the holidays: divinity, peanut brittle, popcorn crunch, fudge. My mom joined this tradition and added chocolate dipped coconut squares, buckeyes, pralines, and one of my very favorites: sand tarts.  My mom got this recipe from the Helen Corbitt cookbook of Neiman Marcus. Some people call them Mexican Wedding Cookies, some Pecan Sandies. They are basically butter, pecans, and powdered sugar –  shortbread-like. They keep really well for more days than many cookies, which is a bonus during the holidays.  They are simple to make and yummy! If you like butter, pecans and powdered sugar, that is. 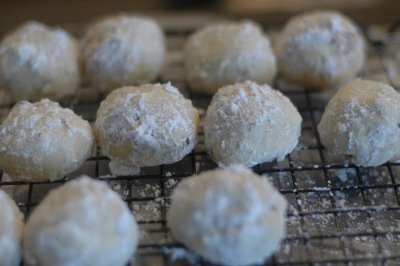 (They keep in a closed container for a couple of weeks.)

This week approaching Christmas, I savor my heritage, all of my dear grandparents, the things I learned from them, including: great recipes, thoughtful traditions and loving me so generously.