I am a fan of cinnamon rolls!  And the smell of them in the oven is irresistible! I have always marveled that Cinnabon Cinnamon Roll shops need not market their goods, as long as they keep baking the rolls in the mall.  The smell lures people in!

As much as I love cinnamon rolls,  I often do not have the time to devote to yeast-based cinnamon roll making! So, these quick little treasures are a good stand in! They are made with canned refrigerated crescent rolls and are therefore super fast and easy while still being flaky and tasty.

I like making mini-muffins and mini versions of things so that less is wasted and people can get as much as they want (1 or 2 or 8…like my son did)! Also, when hosting a gathering, I prefer to serve minis so that guests can have a taste of a lot of different things.

There are several variations of this recipe swirling around the internet and in cookbooks- some with butter, brown sugar, and granulated sugar.  I tried this one which doesn’t call for butter and they were great (since there is plenty of butteriness in the crescent rolls already). So, feel free to play around with the recipe and adapt to your liking! You can add more cinnamon or chopped nuts inside, or even orange zest. This is just the basic recipe to get you started. 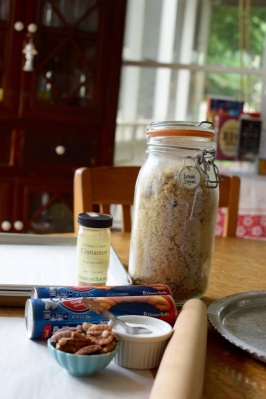 Here’s how to make them:

for the frosting-
1/2 cup powdered sugar
1/2 tsp. vanilla or almond extract
A spoonful or so of milk (or enough to achieve desired consistency)

Unroll crescent roll dough onto a baking mat or another piece of parchment paper.  Separate into 4 rectangles. Firmly press diagonal perforations with your fingers to smooth them out.

Mix brown sugar and cinnamon together in a small bowl.
Sprinkle mixture evenly over rectangles- leaving a 1/2 inch margin around the edge (so that the dough can stick to itself when you roll it).

Carefully roll each rectangle into a log starting from the longer side.
Cut each log into 1/2 thick slices. 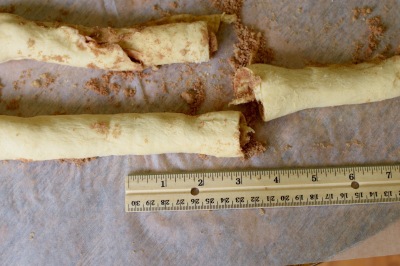 Arrange mini cinnamon rolls close to one another on the baking sheet. 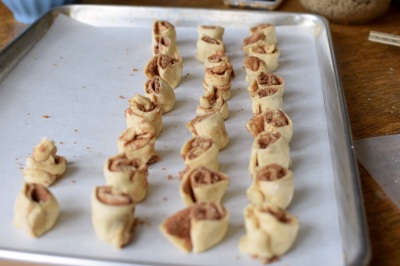 Bake the mini cinnamon rolls in the preheated oven until golden, 10 to 13 minutes.  Transfer onto a plate and set aside to cool for a minute.

Combine the confectioner’s sugar, vanilla and milk in a measuring cup until smooth and a pourable (but not too thin) consistency. Drizzle over warm rolls.  Sprinkle with a little coarse salt (and pecans if you are adding those).

This is a simple
recipe I couldn’t resist passing along to you.
Enjoy!