What do you write when it’s been 3 months since you’ve written anything? It’s been an unusual season for my family. And it feels like we are now in an “in-between”.

I was already behind on blogging- I had a few batches of photos from foods I had made that were awaiting the day when I could write and post. January had been filled with some good eats: yummy Mustard Greens with Hoppin’ John from New Year’s celebrating, a lovely Chocolate Cake (via Barefoot Contessa) for MLK day, and homemade donuts from my Lucy’s birthday and a few other snacks and goodies.

And then one Wednesday afternoon at the end of January we came home from work/school to find that our house had been robbed and ransacked.  It was a watershed moment.

You know, the moments that then mark time.

So we have been picking up the pieces, literally and figuratively.  We have been doing the logistical, spiritual, parental and psychological work of the aftermath of something like this.  Through this, though, we have been given a chance to reevaluate things- what is important, what’s not, where we are “storing up treasures”, the limits and illusion of safety, the complexity of life, the comfort of loved ones.

Sadly, the loss included my computer and my camera.  So my photos of those January foods I mentioned are gone.  And I have just now been able to buy a computer and camera to replace the stolen ones.  I’m still waiting for the wind in my sails to motivate me to blog-on.  It hasn’t seemed to return yet.

It seems like we are in a place of liminality.

Li·mi·nal – of or relating to a sensory threshold;  being in an intermediate state, phase, or condition. (Merriam Webster Dictionary)

An artist that spoke at Belmont several years ago, Makoto Fujimura, spoke of liminality and its challenge and opportunity.  About liminal spaces, places of threshold, he said,

These are dangerous places, filled with struggle.  Uncomfortable.  But places of unique perspective; fertile with creativity.  One who is courageous enough to live there can be a harbinger of truth.

It feels like that space between right now- not quite spring, but not quite winter.  Not quite settled after the break-in, but not in disarray; still replacing stolen items and awaiting another update from the detective, yet trying to find resolution without yet having reconciliation.

So, for this Liminal Space- I share these two recipes.  A great cold buster smoothie recipe that was passed along to me that I have been loving the past few weeks (a good any season breakfast) and an oatmeal cookie recipe that I find comforting. 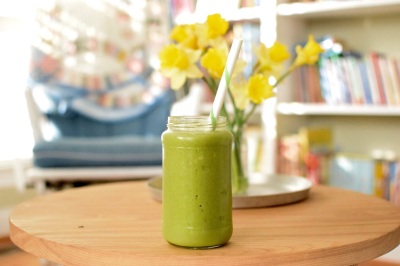 My colleague Debbie sold me on this “cold buster smoothie” that her husband has been making for her this winter.  I was fighting cold symptoms so I took her recommendation.  This is an adaption of their recipe,  so of course, adapt even more as you like.  Debbie described this as “bright”, and I think it depicts it perfectly!

(And my cold was busted!)

Cold Buster Smoothie (inspired by Debbie and Steve)
Blend together:
Mix together in a blender until smooth.  Drink immediately.  Makes 1 large or 2 small smoothies. 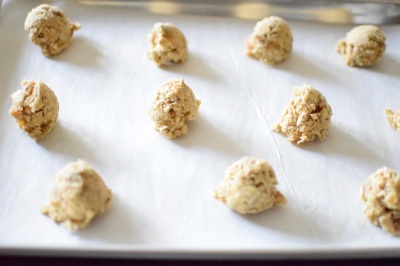 I was talking with my friend Lindsey on Sunday about baked goods and she mentioned loving those decadent chocolate chip cookies with frosting sandwiched between them that they sell at the mall. You know those?  And she said one of her favorite treats is Oatmeal Cream Pies.  I didn’t know.  I will tuck that little information in my memory for some day when a treat might be in order.  She said she loves Oatmeal Cookies.  I told her that I make oatmeal chocolate chip cookies- THIS delicious go-to-recipe my sister developed.  But I usually don’t make traditional oatmeal raisin cookies.  For 2 reasons- my kids don’t love raisins and I don’t especially love cinnamon in cookies (unless they are snickerdoodles…but that’s another story).

My dad loves oatmeal raisin cookies.  His birthday was this week. So I decided, because I had two people to share with, I should make them.  I searched in cook books and online and decided to go with Smitten Kitchen (which is always a low-risk choice).  I made a couple of slight changes.  I used golden raisins and omitted the cinnamon.  The recipe calls for using all brown sugar (no granulated white sugar), a little extra salt and chopped walnuts.  All of these were the keys, I believe, to their yumminess.  They are nice and chewy (with all the oats and brown sugar) with a golden edge. The cookies turned out tasty and my kids gobbled them up! Which was a bonus.

In a large bowl, cream together the butter, brown sugar, egg and vanilla until smooth.  Add in the flour, baking soda and salt and mix together.  Stir in the oats, raisins and walnuts.  CHILL the DOUGH.  (You can do this in the refrigerator for an hour or more, or in the freezer for 20 minutes, or you can scoop them into balls and freeze them for future baking.)

Once dough is chilled, scoop them out and place on parchment lined baking sheets.  Place in preheated 350˚ oven for 10 minutes or until golden brown.  Let sit for a few minutes on the pan and then slide them off with a spatula to cool on a rack. 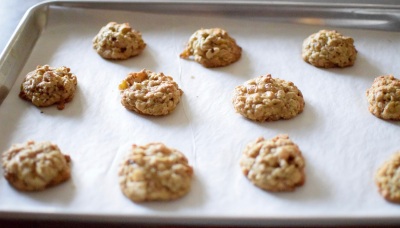 As we wait for winter to pass and the spring to arrive, for seasons of liminality to pass, I want to courageously embrace the unique perspective and fertile ground that is the present.

4 thoughts on “A Season of Liminality: A Threshold”