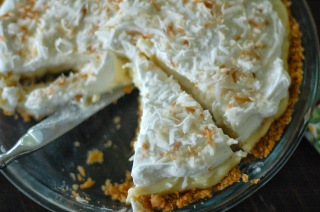 Do you ever long to do something and put it on a “to do list”and it sits there for weeks, months, even years? Sometimes the delay is because we fear that it will be hard to accomplish, or at least complicated or time consuming.  And so we put it off.
And we keep transferring it from one list to the next list.  (It could be writing a letter to someone, or trying a new recipe, or scrubbing the grime out of the refrigerator.) And then finally one day we get the gumption and we just go for it.  And then, we think, “that was not that difficult, or time consuming or dreadful after all”! And we wonder why we were hung up for so long.  And we feel ambitious in that moment and want to do the very thing again within days.  Perhaps to make up for lost time!
Yeah, that was me last week.
I have been wanting to make a Coconut Cream Pie forever! It’s one of my favorite desserts and I had wanted to give it a try and hopefully share it with you here.  But for some reason, the combination of my fear of making the custard-y filling of the pie, and not having the right occasion at which to serve it kept me from making it.  Instead, I continued to rewrite it on the “to make” list on my refrigerator dry erase board for a couple of years.  Then one day, I decided to force myself to just do this.  And, low and behold, it wasn’t hard at all and it tasted even better than I imagined it would!
I’m inspired. To transfer this experience onto other tasks I have been putting off. And I’m inspired to add this pie to my favorites list.
A couple of choices must be made when pie-making after deciding what kind of pie: the crust and the topping. The question is whether to use a pastry rolled crust or a crumb crust.  I love a homemade graham cracker crumb crust- it’s buttery and nutty and is more predictable and easier than a pastry crust. When it comes to the topping you have to decide between a meringue and whipped cream.  Meringues are pretty intimidating, require baking (hoping for the right climate), and in my opinion (though stunning to look at) don’t have much flavor.  Fresh whipped cream, on the other hand, is simple, quick, predictable and oh so delicious!
I wasn’t sure how this combination would be and I needed it to succeed, since I had been putting it off for 2 years and wanted success! I have to say, it was one of the best coconut cream pies I’ve ever had.  (I will warn you that it was much more flavorful on day 2). We had a slice on day one and it was good, but the next day it was de-li-cious!
Coconut Cream Pie
Step 1: Make the Crust
1 1/2 cups Graham Cracker crumbs
1/4 cup sugar
1/2 stick (4 Tbsp. melted butter)
Make Graham Cracker Crust – I put graham crackers in a ziplock bag and crush them with my fist, or with a mallet.  (You can make them as fine or coarse as you like). Stir together ingredients for the crust.  Combine until well incorporated.  Press into a lightly greased pie pan – reserving one spoonful for tasting (okay, you don’t have to, but I can’t ever resist!) Place crust into oven and bake for 10 minutes at 350 degrees.
READ HERE if you want to know more about making a graham cracker crust.

Step 2: Make the Filling
Spread 1 1/3 cups shredded sweetened dried coconut on a cookie sheet or cake pan and toast, stirring occasionally, in a 300˚ oven until golden brown, 20 to 30 minutes. 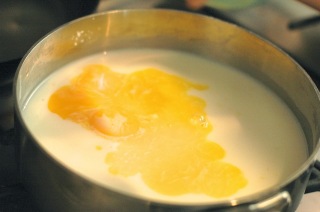 Stirring constantly with a wooden spoon or heatproof rubber spatula, bring the mixture to a bare simmer over medium heat.  Remove from the heat, scrape the corners of the saucepan with the spoon or spatula, and whisk until smooth. Return to the heat and, whisking constantly, bring to a simmer and cook for 1 minutes. 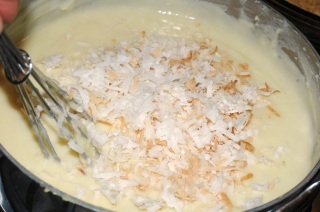 Step 3: Put it Together
Spoon the filling into the prepared crust and press a sheet of plastic wrap directly on the surface. Allow to refrigerate at least 3 hours to firm the filling.

Step 4: Top it Off
Make whipped cream:
Pour 1 pint of whipping cream into mixing bowl and let it go full speed for a few minutes until thickened and peaks remain when you pull out the beater. (Watch it or you will have butter in your bowl!) Add a hefty spoonful or two of sugar and voila!

After devouring their piece of pie- my family declared it a success.  They also decided it was like a cross between Gretchen’s Coconut Cold Cake (which we adore and have every Easter); and Key Lime Pie (which is one of my most frequently craved desserts).  And I agree.  It really merges the best of both of these beloved desserts!

If you want a good, classic, fluffy, delicious dessert – this one won’t disappoint! Don’t delay making this like I did. Now I shall go scrub my floors, so as to mark something else off my lingering list!