I have been depriving myself the fun of blogging the past few weeks as I have been in the thick of paper grading and semester-ending for school. It has been a discipline to stay away from the BLOG in order that I might focus all of my quiet, productive hours on grading the stacks and stacks of papers that my students have written.  I have missed it!

I have now reached the end of the semester so there is daybreak ahead. I wanted to share a recent recipe that I’ve made lately.

I have made several things in the past few weeks that I have been wanting to share, but haven’t had the time to ponder, write about, and edit.  I’ve made: crispy onion rings, a raspberry cream cheese coffee cake that is super yummy, cream cheese brownies and almond shortbread cookies from a new cookbook magazine, peanut butter banana frozen sammies (a quick and easy treat),  and more. So…what to write about first?  I think these Reese’s-like Chocolate Peanut Butter Bars because they are so good, so easy and I have made them three
times in the past month.
They are speedy to put together, they are really rich and a crowd pleaser.

Lainey’s teacher loves peanut butter and chocolate, so on her Teacher Appreciation day, I decided this was just the thing to make her.  The report from Lainey was that Ms. Stevens wasn’t willing to share with her co-workers, which Lainey took as a good sign.  The peanut butter layer is thick and creamy and then it’s topped with semi-sweet chocolate.

When I was making this recipe, I decided to buy a bigger, cheaper, more “regular” kind of peanut butter than the natural-stir-Trader Joe’s kind that I normally use.  We bought a big jar of JIF.  I made the bars for Lainey’s teacher and then I made another batch a few days later.  So, when Lucy (my new reader, who is currently loving reading every single label she sees) saw it, she said, “can I have the “J-I-F-peanut butter” on my sandwich?  I said, “Oh, the JIF?  This is for the bars I’m making.  Let’s use the Trader Joe’s kind we normally use.”  Dave gave me a hard time for not giving her the JIF, reminding me that, after all, “choosy mothers choose JIF”.  (Do you remember this slogan of theirs?)  So, for the next few days, until it was gone, she had “J-I-F and banana sandwiches”.
No Bake Peanut Butter Bars
1 stick butter
1/2 cup packed brown sugar
1 tsp vanilla extract
2 cups peanut butter
2 1/2 cups (or a little more) confectioner’s sugar
2 cups semisweet chocolate chips
Place all ingredients except the chocolate chips in a large microwave safe bowl.  Microwave until butter and peanut butter are melted, one to two minutes.
Remove from microwave and use a large spoon to stir all of the ingredients together until they form a ball of dough that leaves the side of the bowl.  (If this doesn’t happen, spoon more confectioner’s sugar a little at a time until it pulls from the side of the bowl).
Pat into 9 X 13 pan.
Pour chocolate chips into another microwave safe bowl and microwave at 30 second intervals, stirring after each, until completely melted.  Spoon over top of peanut butter mixture evenly.
Allow to cool completely until chocolate hardens (place in refrigerator to help with this process).

Cut into bars with a sharp knife. Serve. 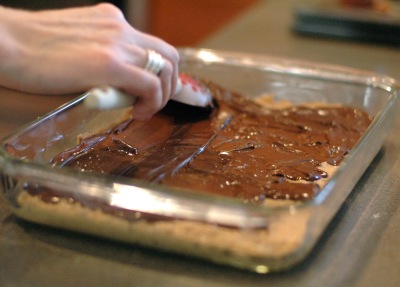 Dave’s “guilty pleasure” when he travels doing music (or should I say ONE of his guilty pleasures, along with Taco Bell, and who knows what else) is eating Reese’s cups.   I find the wrappers in the car the next week under the seat sometimes. So, when I made these bars, I said, “Oh Dave you are gonna love these! You are going to wonder why I haven’t made these your whole life!”
After tasting it, he said, “They are good”,  in a less than enthusiastic tone.
“GOOD!?!?! It’s amazing! It’s just like a Reese’s.”
To which he replied that the problem was that this bar only has chocolate on the top, and he likes that a Reese’s cup is covered in chocolate (top and bottom). In addition, he likes the softness of Reese’s filling.  I realized the softer part was because mine were cold from hardening in the refrigerator, and the chocolate on the bottom part I attempted to remedy with this solution:
I made hockey-puck sized peanut butter cups in muffin tins.

They worked and met the “Dave/Reese’s Test”.  I’ll stick to the bars. I love them. They are almost too good.  I can’t keep my hand out of the pan.
These are no-bake, fast to put together and highly addictive.