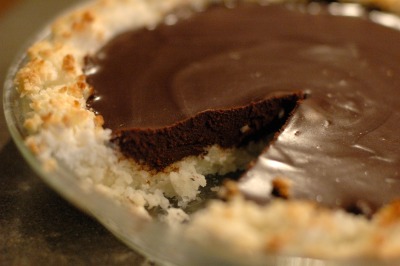 My whole life my mom has reminded me of the golden rule – Do to others as you would have them do to you.  Did you grow up with this as a mantra in your life?  When I had girl drama with school friends as a teenager, I would be reminded to treat others in a way that I would want to be treated.  When there was any kind of conflict or dilemma, this was a guiding principle in our home.
In adulthood: as a friend, as a sibling, employee, teacher, neighbor, – keeping in mind this simple guidepost is transformational.  Many times a week I ask myself, “How would I want to be treated?” This changes things.  When I want to put someone in their place because I am irritated, when I want to give up on someone who is flaky, when I want to elevate myself, in those moments, if I ask myself “How would I want to be treated?”, it usually alters my response.  I turn towards a response of mercy, compassion, gentleness, and generosity.  After all, that’s the treatment I long to be given! 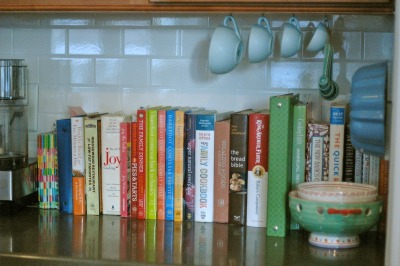 So the other day, friends came for dinner, and I broke a different principle of my mom’s by trying a new recipe when company is coming. Because it was “low pressure” company – a couple from our small group at church, they love us/we love them, I thought it was worth the risk.  I recently reorganized my cookbooks in the kitchen, and with the new arrangement, I am trying to use them more, now that they are more accessible.  A Martha Stewart Pies & Tarts Cookbook is one that I had wanted to use but hadn’t had a chance to.  I flipped through the pages the other day and marked recipes that looked especially yummy (and/or doable).  I found a recipe for a Coconut Chocolate Pie and it looked amazing.  I remembered that this couple we were hosting likes coconut, so it would be fun to make it for them.  I followed the simple recipe and made the pie.  And it bombed!  The chocolate filling didn’t set up at all.  I was so disappointed.  After a couple of hours, I moved it to the freezer, instead of the fridge, hoping it would firm up. I kept checking it, and finally gave up.  Our friends were kind and gracious.  I was irritated. 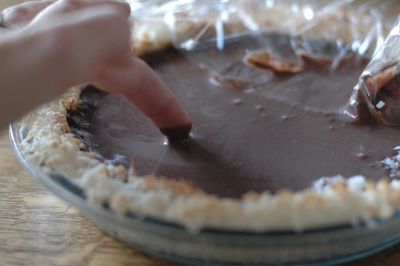 My first reaction was to be mad at Martha Stewart and to mark this recipe off as a dud.  I was tempted to dismiss the entire cookbook.  “If this one was touted as one of the simple ones, and I couldn’t accomplish it, then surely I couldn’t succeed at the others!”, I thought to myself. Then the golden rule popped in my mind.  What would I want someone to do with my recipe? What if someone came to my blog, tried a recipe that I claimed was simple and when they tried it, it didn’t work, and so they dismissed the recipe (that I found to be a treasure)?  What if they just rejected the whole blog? I would be disappointed.  I would want to say, “Oh, no! Let’s trouble-shoot; tell me what you did. What went wrong? Try this, do this, let me know how it goes.”
So, I decided to try again: to give the recipe the benefit of the doubt, to own the possibility that I could have done something wrong.  This time I looked on-line to see if anyone had made it and had tips.  I found a couple of blogs where they had tweaked things a little.  I re-read the simple recipe from the cookbook and evaluated my ingredients.  I realized that while the recipe calls for “bittersweet chocolate – preferably 61% cacao”, I had used semi-sweet chocolate chips because that’s what I had on hand.  I thought it would be fine.  But then I realized that the less pure, less dark chocolate probably was to blame for the pie not setting up.  The filling is made with just two ingredients: heavy cream and dark chocolate.  Therefore, each ingredient really needs to be correct. 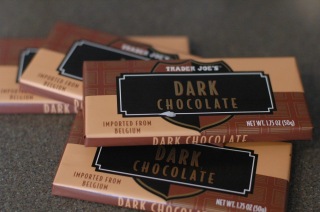 We bought 60% cacao chocolate bars from Trader Joes and finely chopped it, as was instructed in the recipe.  And low and behold, it worked beautifully.  So, really it wasn’t the recipe at all, it was my using the wrong ingredients.   Which leads to another guiding principle of my life – taking personal responsibility for my part of a problem.  I find that our culture is especially prone to blame-shifting. We would rather point a finger at others than to self-reflect and own our part of the problem.  When we can “own our junk”, take responsibility, and admit our faults, it can make a huge difference in our lives (and in the lives of others around us)!
I have a feeling the pie mess-up was a divine gift.  It was a humble reminder to extend grace, give it another chance, own my part of the problem and enjoy the delicious rewards of trying again.
(I know these are deep thoughts regarding pie.  I guess this is what happens when a social work professor is also a baker.  Thanks for going there with me.)
Coconut Chocolate Pie
(borrowed from Martha Stewart’s Pies & Tarts) 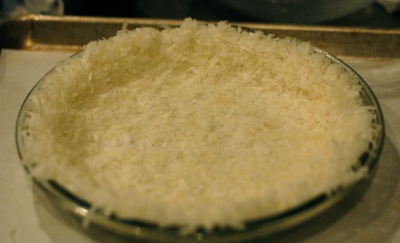 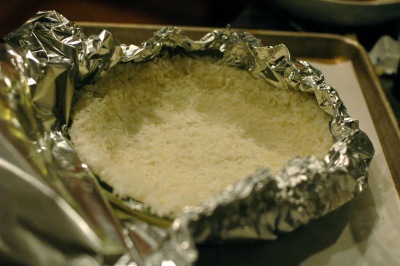 Make the crust:  Preheat oven to 350 ˚. In a food processor, process butter and 1/3 of coconut until mixture forms a ball, 1 to 2 minutes.  Transfer to a medium bowl.  Sprinkle remaining 2/3 coconut over mixture, and combine with your fingers. (which I love to do)

Place a 9 inch pie plate on a parchment-lined rimmed baking sheet.  Lightly spray pie plate with cooking spray.  Press coconut mixture into the bottom and up the sides of pan to form crust, leaving top edges loose and fluffy.  Place foil around edge to prevent burning. Bake until center begins to brown, 10 to 15 minutes; remove foil, and bake 4 to 6 minutes more.  Transfer crust to a wire rack to cool completely. 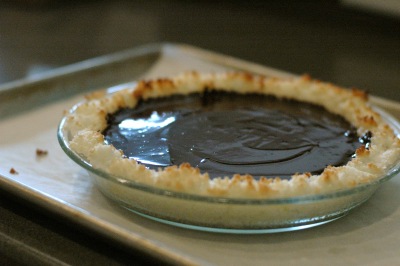 Make the filling:  Bring cream just to boil in a small saucepan; pour over chocolate in a medium heatproof bowl.  Let sit 10 minutes, then stir until chocolate is completely melted and mixture is combined.  Pour into coconut crust.  Refrigerate until filling is set, 1 hour or up to 1 day.
(The cookbook noted that this pie is gluten-free, with the crust made out of coconut).

It really is easy and lovely.  Next time I would like to top it with toasted almond slices.  Mmmm.  I have always wished that Almond Joys and Mounds candy bars could flip-flop, because I like the dark chocolate with the almonds.

9 thoughts on “Guideposts for Life- applied to Coconut Chocolate Pie”