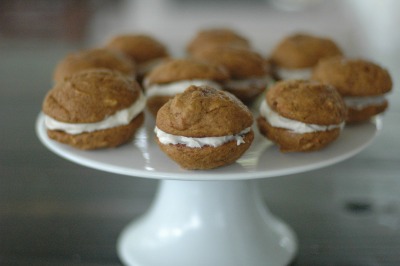 In the last post I wrote about our love for pumpkin spice everything. Since then, I have been working on making pumpkin spice whoopie pies in my kitchen.  My new friend, Hannah, from church, made them for an event in September and we were all wowed by them.  Have you ever made Whoopie Pies? I hadn’t. She told me they were simple– a Rachael Ray recipe from online.  I added it to the top of my “to make list”.
Then, I was in Anthropologie a week or so after that, looking for a birthday gift and saw a big table stacked with the YUMMIEST CANDLES I HAVE EVER TASTED  SMELLED, a huge bowl of adorable turquoise and red kitchen timers, and piles of cookbooks. I smelled every candle (and resisted eating them):  Angel Food Cake, Apple Brown Sugar, Pumpkin Souffle, Whipped Cream and Pear…
And pulled a few cookbooks to peruse, plopped into a nearby gazillion dollar arm chair and thumbed through the cookbooks.  One was a cookbook from an American bakery in London with an entire chapter devoted to Whoopie Pies. It was inspiring and beautiful and seemed so very practical. A Whoopie Pie–what a fun treat.   It’s a hand-held individual cake. It’s like a cup cake, but easier to frost and less messy to handle.
So after this experience, I was all-the-more motivated to make the pumpkin whoopie pies. Hannah was right.  They were simple to make and REALLY yummy! After my first batch, I had a few things I wanted to see if I could tweak, so I made them again and I am not sure that my alterations accomplished much. (Except that I got to take this batch #2 to my Monday class and offer some homemade goodness to my students).

The first time I made them, I felt that they were too puffy, which I thought could have been about scooping them too small.  In my research of the significance of Whoopie Pies, I kept reading that one of the novelties of them is their largeness – of which mine didn’t qualify. I tried in batch #2 to make them larger, which made them a smidge flatter, and certainly more “traditional” but also much harder to eat, as they were too big for single servings.  I also found the first batch to be sticky. I don’t remember Hannah’s being sticky at all. So I thought I would brilliantly dust them with powdered sugar. Which looked lovely and made them not stick… for about an hour until all of the powdered sugar melted into the cake.  Sigh.

I am still learning about these little treasures and want to make a whole variety of different flavors. I don’t quite yet know which cake recipes can transfer well into Whoopie Pieness, but I would love to find out.  I suspect it needs to be a firm enough cake to be picked up and handled.
Speaking of learning…I read that Whoopie Pies originated in New England and are the official treat of Maine.  I love that.  I want an official treat of my state.  Do you know your state’s “official treat”? Rumor has it that they were called whoopies because when men would open their lunch pail, and see that their wife had put one in it, they would exclaim, “WHOOPIE!”.  There is also a belief that they were made from leftover cake batter (I guess when there was too much to fit in the pan) and they would just make a couple of little “pies” out of it.  [When I told Dave this, he asked, “why would you EVER have any extra cake batter”.  He thinks if there wasn’t a pan big enough, he would have gladly eaten the batter]. 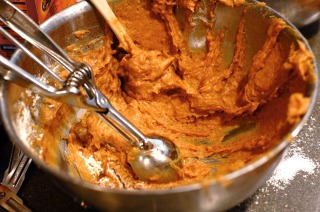 2 cups confectioners’ sugar
(Add a little orange zest for some extra pizazz.)
Preheat the oven to 350 degrees. Line two baking sheets with parchment paper.
In a large bowl, whisk together the melted butter and brown sugar until smooth. Whisk in the eggs, pumpkin puree, pumpkin pie spice, 1 teaspoon vanilla, the baking powder, the baking soda and 3/4 teaspoon salt. Using a rubber spatula, fold in the flour.

Using an ice cream scoop or tablespoon, drop 12 generous mounds of batter, spaced evenly, onto each baking sheet. Bake until springy to the touch, about 10 minutes. Transfer to a rack to cool completely.
Meanwhile, using an electric mixer, cream the softened butter with the cream cheese. Add the confectioners’ sugar and the remaining 2 pinches salt and 1/2 teaspoon vanilla; mix on low speed until blended, then beat on medium-high speed until fluffy, about 2 minutes.

Spread the flat side of 12 cakes with the cream cheese frosting. Top each with another. 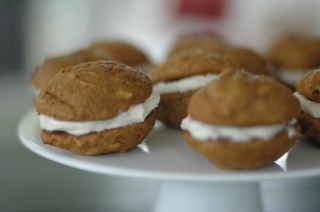 I can’t believe Thanksgiving is less than 2 weeks away!  I’m looking forward to eating pumpkin goodies, of some form.

Lucy and I gathered our branches and made our Thankful Tree today (an annual tradition). We’ll continue to add our paper leaves in the coming days, with a record of things for which we are grateful.  I am so glad to have a visible reminder of GRATITUDE in this season.