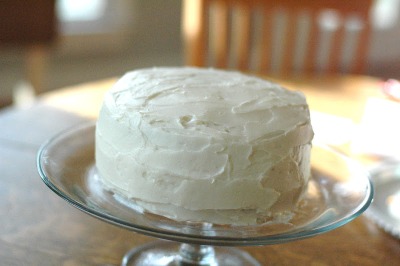 My wife turns 40 today! I can’t even believe it. And what an amazingly stunning 40 year old she is! When we were in college, she would say that her dream was to be 40, have kids who are school aged and to be wise! She’s living the dream and I’m so thrilled and honored to celebrate her.
So why a guest post on her birthday? Basically because I hacked in to her account and she doesn’t know that it’s happening! Not really. A guest post today comes as a result of one of the things I love most about her – she’s HUMBLE. She doesn’t like to toot her own horn. She doesn’t want to draw attention to herself. As for this blog, she isn’t trying to get the largest number of followers that she can, she just wants to share the knowledge she’s learned along the way with anyone who wants to learn, and do so in a creative, fun way, as an outlet for this aspect of her life (cooking and such). So on her day, I didn’t want her to have to try to decide whether to let people know it was her birthday, I wanted to be able to do that for her.
Speaking of the cooking aspect of Julie’s life, it has been a skill that has been developed over pretty much 40 years. Sure, she wasn’t cooking when she was a baby, but I’m pretty sure, as soon as she was able to stand on a stool and reach the counter, her mom let her be a part of what was happening in the kitchen. Then even as she grew up and had projects at school, she used cooking as a way to earn a good science fair grade (thus the photo montage of “What’s missing from the Biscuits?”).
Our first date was even a date to make cookies together (it was actually a smooth move on my part to invite myself to do that – having no idea I was scoring the kind of points I was). And not only has she been doing it a long time, she’s really good at it.
Part of the reason I think Julie’s so good at cooking is because she has always been, and will always be, a STUDENT. She’s always open to learning new ways a recipe can be done to make it better, or to learning a new technique, or never afraid to ask for the recipe of something she tastes somewhere that is amazing. She’s never too cocky (or insecure) to ask, always wanting to grow. That extends beyond the kitchen and is another reason I’m so in love with her. I also think that’s one of the reasons she’s such a great professor. She models for her students what she expects out of them. And then, amazingly, if they don’t measure up, or are walking through a hard time, she is incredibly generous.  Her end goal is not the grade, but it is them growing and learning.
She is so GENEROUS! Not just to her students, but to everyone she encounters. She gives so much of her time, effort and resources to help others. I think she learned this early on from her mother. If she was ever feeling sorry for herself, her mother would encourage her to do something for someone else, therefore getting her mind off herself. So maybe she’s just constantly feeling sorry for herself? No, she’s learned the value of giving and the rewards that come with it. It has become who she is, not just something she does.
I’m trying to think how I can capture all the great things about Julie in a post without boring you all off the page, and I’m not sure I will succeed. So, I’ll sum it up with this. I’m married to a wonderfully beautiful (inside and out) woman who loves God and people, longs to be better, desires wisdom, lives generously and makes me a better person (sometimes whether I like it or not). I celebrate her today!
Last year I surprised her by making a cake from the blog. This year, we collaborated, but I’m still doing most of the work. Italian Cream Cake. I’ve never made a layer cake. I’ve actually not made much of anything, although I have been doing some of the recipes from Cup-a Cup-a (meatballs, tomato soup, chicken and wild rice soup to name a few). I usually watch most of what’s being made, but this time I’m mostly on my own.
She and I made the cakes last night, and I’m so glad Julie was with me because the layers stuck to the pan. A Mess. But it will be covered with icing right? We did have one layer that didn’t stick and it will for sure be the top.
Why Italian Cream Cake?  It’s what she asked for. It was always her mother’s favorite, but Julie didn’t love it. Not until she turned 30 or so, that is. Then it became this cake that she began to love. She says it was a matter of growing up in her tastes. Now, it’s one of her favorites. So, it’s her birthday, whatever she wants, I’ll give it a shot.  For you, my love – Dave