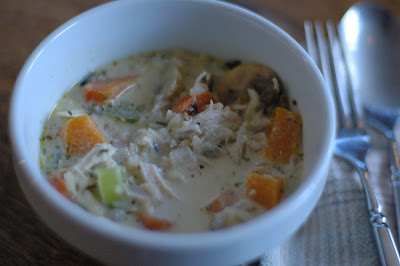 Soup is one of my favorite meals and this recipe is my kind of soup.  It is chock-full of yummy things I appreciate in a soup- Wild Rice, Rotisserie Chicken, broth and sauteed vegetables. This  recipe is my adaptation of  a Cooking Light recipe from years ago. It is a little labor-intensive but it makes a large pot of soup that is very tasty and hits the spot for days!
In December, a friend and I attended a cooking class at one of our favorite restaurants, Marché.  They offered monthly topical cooking classes and we signed up to take the December cookie-making class.  We had a fabulous time.  To get to be “behind the counter”, watching and experiencing first hand the magic of chef Tom in Marche’s kitchen was surreal.  He was delightful and humble.  We were eagerly taking notes on all of his great tips.
One of my favorite “take aways” from our class was:  Read through the entire recipe before making the dish and mark or re-write the recipe in your own way.  Tom encouraged us to rewrite or restructure recipes to make them more readable to our personal style and to make them simpler to follow.  This can be done by bracketing steps to break it down, or indicating the amount of time each step is estimated to take.  Some people prefer having the ingredients listed on top and instructions below while others write ingredients throughout the instructions.  Whatever is your best way of tracking, is the way you should go.
I do this to some degree but the value of this tip was learned last week, the hard way, when I was making a multi-step recipe that I hadn’t made in a year. I was making this Chicken & Wild Rice Soup for my friend, Kristen, who had a baby girl.  The dessert was in the oven and I embarked on the soup-making.  I read the first line,  “Prepare rice according to instructions on the package.”  I began to prepare the rice and failed to read further.  I was frustrated, knowing that it would take 30 minutes to cook the rice, so I assumed that I had to wait to proceed with the rest of the recipe.  I did go ahead and prep the veggies but waited to do the next step of the recipe.  In the meantime, I mixed up the salad dressing for the green salad I was making and cleaned a bit. When the rice was done, I looked at the recipe and realized that the next step was to prep and saute the veggies.  Then I noticed that there were about 4 more steps following (or about 30 more minutes worth of work) before the rice was to be added!  Which means, that I could have started the rice and immediately proceeded with the rest of the soup preparation.  So instead of taking an hour and a half to make the soup it could have taken more like 40 minutes.  The soup was completed and was worth the effort but Chef Tom’s words rang in my head.  The next day, I proceeded to REWRITE the recipe.   (See newly formatted recipe as follows)
Chicken and Wild Rice Soup
1 (6 ounce) box long-grain and wild rice mix (such as Uncle Ben’s)
1 Tbsp olive oil
1 ½ cups chopped red onion
1 sweet potato, peeled and diced
1 cup chopped carrots
2 garlic cloves, minced
1 (8 oz.) package mushrooms, halved
¼ tsp dried tarragon
¼ tsp dried thyme
2 cups water
2 Tbsp cooking sherry
2 (15.75 oz) cans of less-sodium chicken broth
1 cup 2% milk
3 cups shredded rotisserie (or roasted) skinless chicken
1. Prep vegetables and chicken.
2. Prepare rice according to package directions.
Meanwhile-
3. Heat oil in a large pot over medium-high heat.  Add chopped onion, sweet potatoes, carrots, garlic and mushrooms.  Saute for 6 minutes or until onion is tender.  Add tarragon, thyme, water, sherry, broth and milk into the vegetable mixture.  Bring to boil.  Reduce heat and simmer for 20 minutes or until slightly thick.
4.   Stir in cooked rice and chicken.  Cook for 10 minutes or until thoroughly heated. 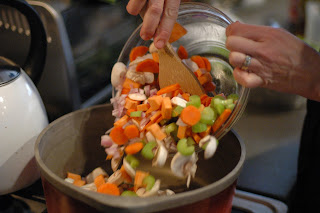 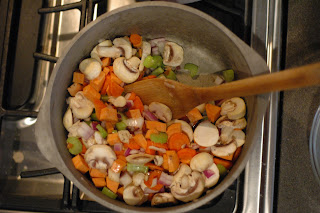 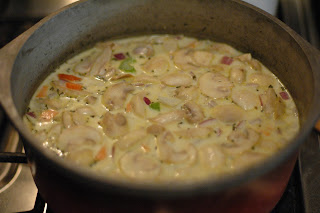 So, don’t be afraid to mark on your recipes, or re-write (or re-type) them with the format that makes sense to you.  It will help your cooking to flow more smoothly.
Lesson learned!  Oh, and read through the entire recipe before you begin, so that you know the whole scope of the process from the start.
And enjoy some savory soup!

7 thoughts on “Chicken & Wild Rice Soup and A Lesson Learned”