It’s my 15th Wedding Anniversary. It’s hard to believe that we have been married 15 years, and yet, I can’t remember life without Dave. Our relationship has been an anchor in the midst of many joys, challenges, twists and turns of life. For our anniversary I have made a Red Velvet Cake with Cream Cheese Frosting and we will proceed to stuff ourselves with it for the next couple of days.

Red Velvet Cake is Dave’s cake of choice for celebrations honoring him. It seems a little redundant to make him the same cake for all of his “big events” as they all happen in a matter of 3 months: June-Father’s Day; July-Birthday; and August-our anniversary. But it is his favorite! Last month, when we were devouring the Birthday-Red Velvet he said it was the best one I’ve ever made. I guess the practice is paying off.

Seventeen years ago Dave and I were dating and that summer I was working at a camp in North Carolina and he was working in Kentucky. We decided to rendezvous in Knoxville during my day off and celebrate his birthday. Dave loves picnics and as a college student was always sitting on some shady patch under a tree playing his guitar, writing a song. He didn’t have a quilt, which I thought was tragic! So, my generous mother “helped” me make a quilt for Dave’s birthday gift. (Actually I supervised as she made this great picnic quilt. I know she was thinking… “this guy better be a keeper because this is a labor of love”). I made him a Red Velvet Birthday Cake and decided I would blindfold him and take him to Cherokee Boulevard, a nice grassy area by the river, where I would set up the new quilt and we’d have a Red Velvet picnic for his birthday. Well, I am not great at surprises- giving or receiving them. And in my nervousness and rush I somehow smashed my knee into the cake, which smeared onto the quilt while he was standing there with his blindfold still on. So, there I was with the most staining cake EVER all over the beautiful gift my mom had created (which he had not yet laid his eyes on) and there was a big knee shaped hole in the cake I had made. Not such a Happy Birthday! My mind raced “What do I do? Get back in the car? Run away? Lick my knee? Cry? Laugh?” So, I instructed him to take off the blindfold as I then cried and laughed and recounted what happened and he graciously and lovingly ate globs of frosting and cake off of the quilt and drove me back to my parents’ house where we stain treated the new quilt. Luckily my mom is the queen of stain-removal (more on that in a future post). 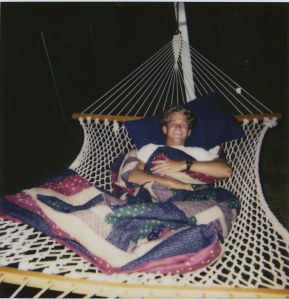 [This photo of Dave is from that summer in 1993 with his beloved quilt that survived the cake trauma.]

So Red Velvet Cake and Dave and I have quite a history. A few things that I have learned along the journey are:
1. It must have homemade cream cheese frosting (or else what’s the point…really? It’s a red chocolatish cake.)
2. Unless you want “Mauve Velvet Cake”, which I made for my friend Elaine’s birthday last year, you have to use an entire bottle of Red Food Coloring- which freaks me out a little, but it just is what it is.
3. You really need to make the cake and frost it the day before you want to eat it, as the cake moistens and the flavors meld together so nicely by day 2.
4. Don’t serve it on a quilt, on the ground at the park.
5. A man like Dave is a rare gift. 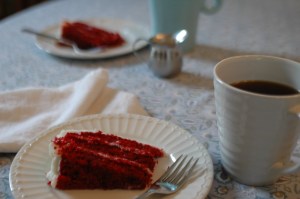 9 thoughts on “A Red Velvet Relationship”