Do you ever find a recipe that is so tasty that you find yourself thinking about how and when you can fit it into your menus for the week, who you can share it with, or how you can justify making it?
This is the case with this Brazilian Lemonade. My friend, Melissa S., was coming to have pizza with us last spring and brought the stuff to make this recipe.  She had seen it online and had been wanting to make it.  She knew I would love it.  And she was right.
I need to share my angst about the name of this beverage. When Melissa told me it was called Brazilian Lemonade, but was made with limes, I was perplexed.  I asked her if she was sure it wasn’t called Brazilian Limeade.  She showed me the recipe from the blog where she found it, and I told her I couldn’t do it!  I just can’t call a thing what it is not.  So, I decided to do a little further research.  I googled around and found that in other places online there was discussion about why brazilian lemonade was made with limes.  The information I gathered was that in Portuguese a lemon is “lima” and lime is “limão”.  This made some sense to me.  I also read that limes are much more prevelant in Brazil than lemons.  In addition ironically, in Brazil, some people call this recipe “Swiss Lemonade”.  Naturally!  One place I found it called Limãnada, (pronounced LEE-mah-na-tha).   This made more sense to me than Lemonade.  So maybe it’s not Lemon-ade, nor Lime-ade, but rather, a truer pronunciation of Limonada, reflecting its Brazilian origin.
I felt much better.  Now I call it Brazilian Limonada (or sometimes Brazilian Limonade) and I make it as often as I can justify it.  Now I just have to work on saying it with a straight face, as I shift from my southern accent to my Brahhzzillian accent in one sentence – (from Shelby of Steel Magnolias to Gloria of Modern Family).  “Hey y’all, do ya want me to make some Brazilian Limãnada tonight?” It makes me think of my witty friends Angela and Ray, who lived in Chile for a while after we finished college.  We always laughed as Angela told stories about Chile (pronounced Chee-lay as opposed to our incorrect pronunciation of Chill-E).  She would dramatically flip back and forth between her Tennessee and Chilean accents and we would all die laughing.
The ingredients to this recipe are super simple but special. Are you ready for this? Limes, sugar, water and sweetened condensed milk (the nectar of the gods).  What is it about sweetened condensed milk? It makes everything better!  My favorite banana pudding calls for it.   Cold Coconut cake, I recently posted, is delicious because of this great ingredient. Coffee is better with it.  [There is a wonderful local coffee spot in downtown Nashville, Crema, that has a coffee drink called a Cuban.  The first time I went there I was told I must get the Cuban- it’s espresso, steamed milk and sweetened condensed milk! It is ridiculous! I have been many times in the years since and I can’t seem to bring myself to NOT order it.] Simply stated, sweetened condensed milk just seems to make everything better.
Back to the Brazilian Lime Drink.
It’s delicious!
It is easy, and so creamy, zippy, and unique!
I wanted to post it this week, in honor of Spring and the upcoming Cinco de Mayo.  It’s a great non-alcoholic, warm-weather drink for your mexican fiesta, or just about any event.

Brazilian Limonada
4 juicy limes (ones with thin, smooth skins are the juiciest and the thin skin cuts down on the chance of your drink being bitter)
1 cup sugar

Make a “simple syrup” or “sugar water” by mixing cold water and sugar in a large jar or liquid measuring cup very well until sugar is dissolved. Chill until ready to use. (This step can be done ahead of time.)

Wash limes thoroughly with soap. Cut the ends off the limes and then cut each lime into 8ths. 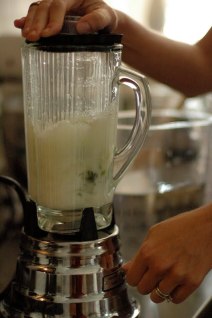 Dump the parts of the limes left in the strainer into the trash.
Repeat with the remaining limes and sugar water. Stir together.

Test it. You may want to dilute it with water if it’s too thick or sweet for your liking. If it’s bitter, just add some more sugar and maybe a little more milk.
Serve immediately over lots of ice. 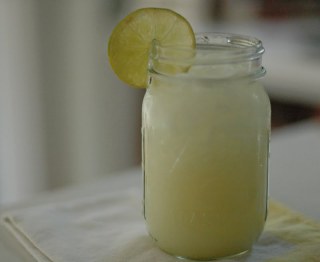 Call it what you want to, attach it to any culture you would like: Brazil, Switzerland, Mexico, or the United States. Use a Portuguese accent if you’d like, or a southern drawl.  But whatever you do, don’t omit the sweetened condensed milk!