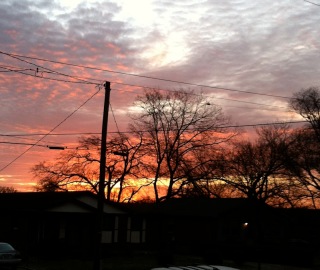 This wednesday is Ash Wednesday in the Christian calendar. It marks the beginning of the 40 days of Lent, which end with Easter.  I didn’t grow up in a denomination that celebrated or honored Lent. We just by-passed all of that and focused on Easter.  We bought new, fancy, spring dresses and white shoes (or sandals) to wear on Easter Sunday when people came out of the woodwork to join us at church.  During college I became aware of Lent and the season of anticipation of the days leading up to Christ’s trial, death, burial and then resurrection!   After college I began attending a church that had a Good Friday service.  This was insightful, in that it was a somber (uncomfortably so) service where we pondered – through song and word– the weight of the death of Jesus.

Easter had never felt so anticipated, relieving, and celebratory.

So, when I began to consider participating in Lenten practices, I started with daily readings leading up to Easter and attempting to fast, or “give up something” during these days.  I used to say, jokingly, that I would give up smoking…(because I’m not a smoker)! I have had varying success/revelation/failure/struggle throughout the years with “giving up” things for Lent.  I have fasted from chocolate, coffee, caffeine, dessert (the hardest by far), and a “words fast” – fasting from gossip, complaining, judging, etc.

Some of the past few years, I have felt like my life has been one big LENTEN FAST– with young children and an intense job, and a household to keep.  I feel that my every day life is a sacrifice!

Therefore, it’s hard to feel inspired to fast from yet another comfort.

Fredrick Buechner, a favorite author of mine, beautifully explains the season of Lent from his perspective in his book, Whistling in the Dark:

In many cultures there is an ancient custom of giving a tenth of each year’s income to some holy use.  For Christians, to observe forty days of Lent is to do the same thing with roughly a tenth of each year’s days.  After being baptized by John in the river Jordan, Jesus went off alone into the wilderness where he spent forty days asking himself the question what it meant to be Jesus. During Lent, Christians are supposed to ask one way or another what it means to be themselves.

When you look at your face in the mirror, what do you see in it that you most like and what do you most deplore?

If you had only one last message to leave to the handful of people who are most important to you, what would it be in twenty-five words or less?

Is there any person in the world, or any cause, that, if circumstances called for it, you would be willing to die for?

If this were the last day of your life, what would you do with it?

To hear yourself try to answer questions like these is to begin to hear something not only of who you are but of both what you are becoming and what you are failing to become.  It can be a pretty depressing business all in all, but if sackcloth and ashes are at the start of it, something like Easter may be at the end. 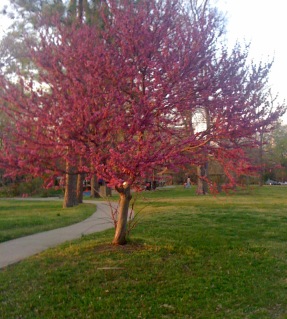 Last year, I wanted to involve my children in the season of Lent without legalistically requiring them to fast from something, when it’s not their choice. (I really don’t want to turn them off from this sacred season).   I contacted my friend Emily, who is always brimming with creative ideas for intentional parenting and celebrating.  She immediately sent me photos and reflections from this crown of thorns ritual they practice in their home.  We did it last year and it was profound.  I expect that the second time around it will be as well. (A little different, but equally stunning).

We placed a styrofoam wreath on the table, to be kept during the 40 days of Lent, with a cup of toothpicks nearby.  Each night at dinner, those at the table had the chance to confess sin from the day.  When they did so, they placed a toothpick in the wreath, symbolizing the thorns in the crown of Jesus on the cross.  It was uncomfortable to do this – on many levels– (being aware of the sin in our hearts, the physical placing of the thorns in the crown, and the admitting of sin out loud).

This is an especially vulnerable feeling when done with guests at the table.  (We warned them that we would be sharing and invited them to participate in whatever way they felt most comfortable…we didn’t want to impose this radical ritual on our guests)!

Last year when we did this we found that as the days progressed, we became increasingly more aware of our sin throughout the day and even began to see patterns of our repeated sins. 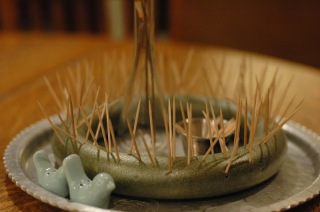 The glorious part of this ritual is that on Easter morning, before the children awoke, I removed all of the thorns and replaced them with spring flowers!  When they came down to breakfast, they found that the thorns of our 40 days of sin had been replaced with beautiful, vibrant flowers! 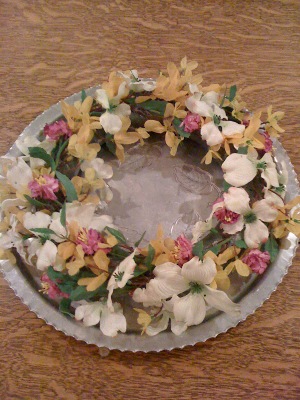 Another beautiful gift last Easter was that my friend Blair, introduced these lovely sweet potato biscuits to us, at our Easter feast! We host an Easter dinner/lunch each year for people who are in town and need a place to go.  It’s a fun and unpredictable event.  I will go into the details more in the coming weeks, and share some of our favorite food traditions of Easter! But as I was reflecting on last year’s Easter Season, the wreath of toothpick thorns and the sweet potato biscuits are the two new traditions that were introduced, that we are excited to repeat this year.

In case you came here today looking for a recipe, rather than a spiritual guide, here is a winner of a recipe!  The recipe is from Blair, via her mom, via Southern Living Magazine (always a good sign). 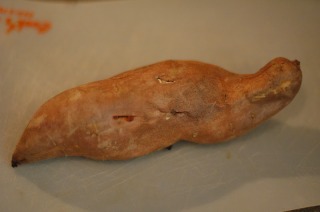 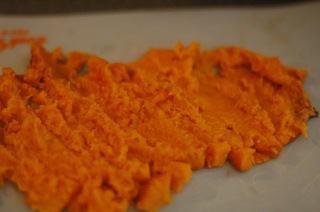 Combine flour and sugar in a medium bowl.

Cut shortening and butter into flour mixture with a pastry blender or a fork until crumbly; add mashed sweet potato and milk, stirring just until dry ingredients are moistened.

Turn dough out onto a lightly floured surface; knead 3-4 times.
Pat dough out into a rectangle 1/2 inch thick; cut into 12 pieces, then gently shape them into a circle with your hand, (or cut with a 2 inch round cutter).
Place on a baking stone or a parchment-lined baking sheet.
Bake at 400 degrees for 15 minutes or until golden brown.

This week, the season of Lent begins, and I am excited to have a focus during these days of winter. Communal confession and sweet potato biscuits are part of what I anticipate might make this season special to me.  What about you??