I have been feeling the need to write a tribute to Karin, as she has had such a large influence on my life. And though we haven’t lived in the same city for years and years, her influence continues to shape and mark me.
It was 20 years ago that we met on Belmont’s campus.  She was my next door neighbor.  I came from Knoxville, Tennessee and she from California.  Having grown up in the south all my life, southern living was all I knew.  Karin is pronounced kah-RIN (think Corinne rather than Karen, which makes sense because she is from hip-California after all).  Not only did Karin bring an engaging, fun, deep, creative friendship into my life, she also brought a lot of other things …
She taught me the value of 100% cotton sheets, vintage linens, old quilts, black and white photography, Origins products (which had not yet arrived in Nashville at the time), and a café au lait (coffee with steamed milk) –my coffee drink of choice still today.
The next school year we moved off campus together with our friend Teresa.  We established a household that was a wonderful haven, as well as my first home apart from my family.  Karin’s influence on my cooking really began to take effect in these three years as we shared a kitchen.
My mother is such a wonderful cook, baker and entertainer.  She has most certainly been the primary influence in this area of my life.  However, Karin became a huge additional influence, with her different angle that she brought to the kitchen counter, coming from California. Also, you have to understand that this was at the dawning of the internet. So, not only was my little life expanding its borders – being in a bigger city, establishing my own household, having a cultured roommate – but also the world was expanding its borders as well, as technology began to make the world more accessible.  Recipes, ideas and ingredients were regional, and the recipes I had were limited to the cookbooks I had or the recipes I had handwritten in my box.  There were no on-line resources.  The way you expanded your horizons was by other people who had other landscapes to offer you. (Are you thinking I sound like I’m speaking of the 1800’s at this point?)
I remember vividly Karin introducing me to balsamic vinegar and olive oil.  She taught me about kosher salt and fresh herbs.  I didn’t even know basil existed.  She introduced me to mango! She taught me how to steam squash (which she did all the time).  She even made steamed artichokes with drawn butter and gave us all a tutorial on how to eat a fresh artichoke properly.
And Artisan bread.  The first time she came home with a loaf of Pane Bello bread from the then-brand-new Bread and Company bread store, I was in awe.  It was a beautiful, artistic loaf of bread, and when she sliced it and served it with our pasta (not spaghetti like I grew up eating, but “pasta”) I was confused.  The hard crusty exterior threw me off.  I had always had bread that was soft, while maybe a little crispy on the edge, like “French Bread”, with our spaghetti. I had never had bread with a tough crust and a porous, holey crumb.  I asked her if it was supposed to be this crusty and hard to eat and she said, “yes!” 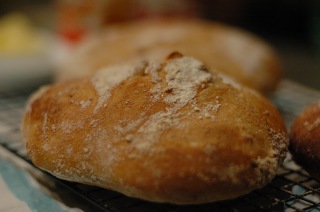 Little did I know that Artisan bread (or as my kids call it, “crusty bread”) would become  such a love of mine and my family.  My favorite sandwiches are made on crusty bread.  We made grilled cheeseon it this week for Halloween with friends.  We dip it in olive oil with herbs when we have a fancy Italian night.

A couple of years ago I began trying to make my own artisan bread.  Since I love to bake, and like to try new adventures and am cheap, I really wanted to give it a try.  It is astounding to me that you can make beautiful loves of delicious bread with flour, salt, water, yeast and sometimes a little olive oil and/or honey.  For pennies!  So, I asked my friend, Steve- the bread man- about the best resource and he recommended The Bread Bible by Rose Levy Barenbaum.  I bought it and have tried several recipes from it.

My favorite scones are from that book. (You must make them if you haven’t already!)
The artisan bread recipes are quite complicated, and have weight measurements included in the recipes (which is a tip off that it is high level…a little out of my league).  I have had some success with the artisan bread recipes in the book but have had a couple of flops as well.

Then, this summer I learned about this book:  Artisan Bread in Five Minutes A Day. I checked it out of the library and made a couple of different recipes and it is crazy-simple and so yummy. In fact, Dave warned me that I couldn’t make a habit of this bread making because our family’s waist-lines can’t handle it. We cannot ration well.  So, I am trying to pace myself.  I bought the sequel to their book, Healthy Bread in Five Minutes A Day, thinking at least whole wheat flour might help out.

Here is a video of the authors demonstrating their technique.

So, in honor of Karin, I made a couple of Boules (Free-form artisan loaves). I wanted to share them with you, readers, to hopefully inspire you to give it a try (click HERE for the recipe and instructions). You can do it!!! Karin has always encouraged me to take risks and has always believed in me when I doubted my abilities.

And, if you have a friend (or friends) who have taught you and influenced you, I encourage you to take a minute to thank them specifically for the things they have given to you.

To Karin: I wish I could run a loaf over to you in Vermont to share with you (and your sweet family) and serve some with butter and jam and a café au lait.  You are a loyal, dear friend.  We have been through thick and thin together.  You have taught me beautiful life lessons: like accountability, and taking risks, and acceptance. You inspire me and have improved my life in countless ways… far beyond the kitchen.

4 thoughts on “A Tribute to Friendship (and Artisan Bread)”