This has been an exciting week at our house.  Dave, my husband, has been working on an album for the past few months and this week we got them from the printer! I had been thinking about what kind of celebration goody I should make for him and he suggested Snickerdoodles (his favorite cookies).  That very day we saw my sister and she, coincidentally, brought us/him a sack of Snickerdoodles that she had made.  I said to him, “Oh great! You got your Snickerdoodle fix!”  However, that was not what he was thinking.  He saw the cookies she brought as more of a foreshadowing of even more snickerdoodles to come.  He gobbled hers up (and shared a couple with the family) and then I made some more.  I read recently about adding a little kosher salt to the cinnamon sugar mixture in which you roll the dough.  I thought that sounded like a nice twist but Dave wasn’t so sure.  But we tried some that way and we liked them!  It is a subtle change but a nice addition.

I am not sure what it is about these cookies, but he can’t seem to eat an appropriate amount of them.  They are soft and cinnamony and sugary.  In fact, let me illustrate his lack of self-control with these cookies with a story from our marital history.

About 12 years ago, Dave was traveling to a conference center in North Carolina, a 5 hour drive, to lead music at a week-long event.  I thought it would be nice to send some homemade cookies with him for the week, as I knew he would be eating camp food the entire time.  I made him a batch of Snickerdoodles (about 3 dozen) and sent him on his way.  He called me when he arrived at his destination that afternoon and let me know that he had made it safely there and that he loved the cookies.  I said, “loved…past tense?”.  He said, “Yeah, weren’t they for the drive?” To which I replied, “You are going to be sick! They were for the week!” Unbelievable!  Needless to say, I can’t make these regularly in our home, he won’t let me- he knows he has no restraint with them. 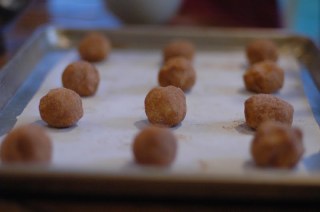 I wish I could give you a cookie sample on-line, but that’s impossible.  However, I can give you a little music sample. (Well, actually, I can get my computer-smart husband to give you a little sample through this widgety thingy.  I wouldn’t have a clue how to do this – or click here if you don’t see anything below.) You can take a listen below.  Just click on the arrows on the far left beside each song to hear a little.  Hope you enjoy!  The CD is a collection of Hymns, old classics and a couple of new, modern hymns.  I think it is so well done, with great instrumentation and arrangements.  I am loving it! I couldn’t help sharing with you some of the other things that have been cooking at our home lately.  Check it out.  And make a batch of cookies while you’re at it- and see how fast they are devoured!