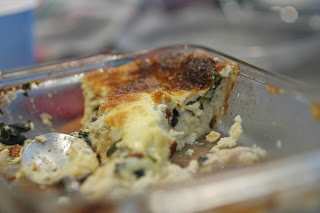 I just gave a test last week to my social work students and there was a “definitions section”.  It’s always a challenge to determine the most effective way to test the definition of terms.

I could provide the word and they supply the definition, which seems like the most difficult for the student, but also for me, because I then have to decide, more subjectively, how complete the definition is;
OR I can provide the definition and they supply the word, which is far more objective, making the grading much easier. Unless that is, of course, if a student gives an answer that could be true, though not my intended term.  So then I’m led to the question of a word bank- to provide or not provide. I’ll stop. This has nothing to do with your kitchen.

I’ll just say, it is a good thing the test was not on Egg Dishes, because as I have discovered, the terms are not so easily defined.

A couple of weeks ago I was co-hosting a baby shower with my friend, Jessica, for our friend, Alyson, who is in our women’s Bible Study.  You know how I feel about the necessity of baby showers!  Read this post if you don’t know, and want to know.

It was a brunch- my favorite meal! I was in charge of making an egg dish.  I really like eggs.  In fact, I have grown to like them more and more over time.  I think because I have had some really nicely prepared eggs in the past few years that have endeared me to them. Also, because I continue to like meat less and less, I think it’s my body’s way of telling me to find some protein. (I have been working on another post about simple breakfast eggs that I will share soon).

But eggs for a crowd can be tricky- especially since something like a quiche is impractical for a crowd of 15 people. So I started poring through my cookbooks and notebooks, looking at my favorites and trying to find the perfect dish. 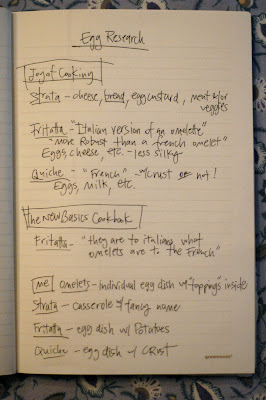 I began to get really confused about all of these terms: Strata, Quiche, Breakfast Casserole, Frittata.  Do you know the definition?  I thought I did, but with each page I read, it became clear that it’s not very clear.  I realized that the only thing consistent in any of the definitions from source to source, was that every one of the dishes, in every one of the recipes I found, had eggs in them. (And almost all have some type of milk in them too).  That’s it!  Well, thanks a lot!

I finally decided to go with a recipe that I have had success with in the past.  I chose to call it a Strata because it just sounds more swanky than a breakfast casserole.  You can make it with ground sausage, which I have done in the past or, with spinach and sun-dried tomatoes, like I did for this shower- which is more Alyson’s style (and mine).  And it worked! Yum!  My friend Melissa S., who was at the shower, called it “Silky Spinach Sundried-tomato Swiss Strata”! How’s that for alliteration?

I don’t know where I originally got the recipe, but according to my notebook where it’s written, it was in 2004.  I have changed a good bit of it, so I guess I can now call it mine, right?  This recipe is full of rich dairy products, so it is a splurge! But it is lovely for a special occasion- silky and savory.  It serves a crowd, isn’t too heavy, and doesn’t feel like you’re eating soggy bread (which is my complaint with some breakfast casserole dishes).  You could serve it for dinner with a simple green salad and have a filling, lovely meal.

Next time I make it, I want to add even more veggies-maybe zucchini and mushrooms.  I think the trick is cooking the vegetables and removing the liquid before adding them to the dish, so as to prevent watery Strata.
Silky Swiss Strata
2 cups shredded Swiss cheese
1/2 lb. medium pork sausage
OR for vegetable version:
¾ cup sun-dried tomatoes
1 bag fresh spinach
1 clove garlic
1 Tbsp olive oil
1 French baguette, thickly sliced
1 cup shredded Parmesan cheese
7 eggs
3 cups whipping cream
2 cups skim or 1 % milk
¼ tsp. dried sage
1 tsp. salt
1 tsp. ground dry mustard
Cook sausage and drain (or sauté veggies in oil).
Place bread slices in a greased 13 X 9 glass dish.
Layer sausage (or veggies) on top of bread, then Swiss cheese, then Parmesan cheese
Wisk 5 eggs, 2 cups cream, and next 4 ingredients together until well combined
Pour evenly over cheese
Cover and chill for 8 hours (or over night)
Wisk 2 eggs and remaining 1 cup of cream together
Pour evenly over
Bake at 350 degrees for 1 hour or until browning on top and fluffy.

The good news about all of this is that, according to my research, there are no clear definitions for egg dishes- so you can name it what you want!