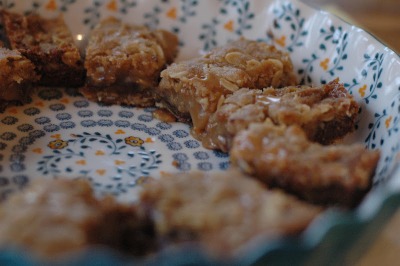 I am a believer in substituting.  I often replace a name brand thing or a fatty thing, with something less costly, caloric or prestigious.  In recipes,  I love finding cheaper, healthier ingredients to use.
Sometimes substitutions work and other times they just don’t measure up.  There are some ingredients for which the generic just aren’t comparable to the brand name, others are equally good.  In recipes, it’s sometimes trial and error.  For example: I think yogurt is a great substitution for butter in muffins, while I think applesauce in cookies alters them too severely.
Sometimes you have to learn the hard way.  Which reminds me of middle school.  Do you remember being a middle schooler?  It’s just brutal.  No matter who you are or where you are from, it’s just awkward. And kids are mean. And insecure (I now understand).  My parents have always been very practical and prudent with their money. This trait is one I admire greatly.  I can remember my father talking to me about name brands when I was a growing up.  He would challenge me to consider that if the same exact shirt, when store brand, was $10, and yet was $38 if it was Polo brand, then I actually was paying $28 for that little embroidered man riding on a horse.   This made sense and I agreed that there wasn’t a difference anyway!

However, when I was in Middle School, I really wanted to get a pair of Docksiders. 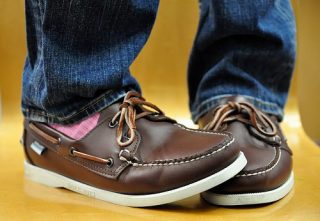 Did you ever have Docksiders? They were all the rage back in the 80s when I was a teenager. I really wanted them.  I remember shopping with my dad to see if we could find some. Then my Dad found some at J C Pennys that were a knock off. They were significantly less expensive and my dad argued that they were just the same.  I tried to agree, but I knew deep down inside that they really weren’t Docksiders.  But I wasn’t paying for them, after all.  So, to home we went with the knock off docksiderish shoes.

When I wore them to school the next week, my fears were realized.  My mean classmates began to make comments about my knock off brand shoes.  Flush-faced and devastated, I began to sit cross ankled, so as to hide the labels that were glaring on the outside of each of my shoes.  I am not sure how much I ended up wearing those shoes.  This was one of those situations, where I have to agree with Marvin Gaye and Tami Terrell – Ain’t nothing like the Real thing, baby.
So, a few weeks ago, I saw this incredible looking Carmelita Bar on Pinterest. (If you haven’t found pinterest, and you like beautiful things and collecting ideas, you should totally check it out). I pinned it and added it to my “Yum” board.  I was needing to make a dessert for our Social Work Chili Supper and was thinking it might fit the requests of my students: yummy, gooey, chocolate and no nuts.  So I made it.  It was everything and MORE than what I hoped it would be.  Carmelitas.  Layers of brown sugar/butter/oat bar cookie with thick, melted carmel, and semi-sweet chocolate in-between.  YUM!

Carmelita means “little caramel” and though you might cut them in small pieces, there’s nothing really “little” about these bars.  I am thinking “Carmelgrande” might be a better name for them.

So when my mother was coming to town last week, I wanted to make them for her. I thought I would try substituting my 1% milk for the whipping cream used to liquefy the caramels.  I thought, “milk’s milk…and the caramels are so rich it will be okay”.  I thought with all of that butter, chocolate and caramel, the heavy cream was perhaps unnecessary.

But I was wrong. It wasn’t the same.  It was far thinner and when cooled, it was less rich-tasting.  Now, don’t get me wrong, my mom and sister, who tested them, thought they were fabulous, but when Amy and Dave, who had tasted the first batch as well, compared the two,  they wholeheartedly agreed that the caramel flavor was diminished with the milk in the second batch.

So, I decided to make them one more time, just to make sure! (I didn’t want to give up too soon) and tried it with half and half.  It was much creamier than the milk, but still not as “wow” as the heavy cream.  So, I say, if you are trying to be healthy, make them as directed and just eat one –  share the rest with your friends, family, neighbors, co-workers, but don’t compromise on the ingredients.  In this case…”to NOT SUBSTITUTE” is the answer! 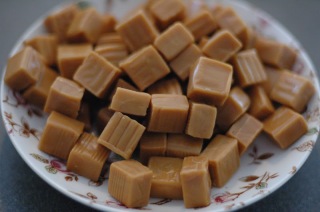 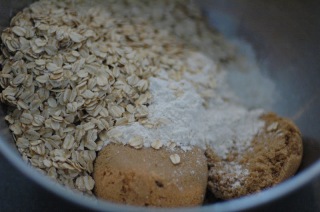 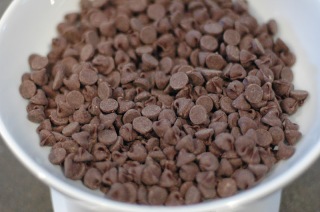 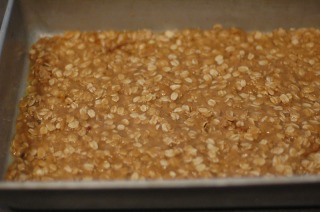 In a bowl, combine melted butter, brown sugar, flour, oats, and baking soda.  Pat half of the oatmeal mixture into the bottom of a lightly sprayed 8 x 8 pan.  Bake at 350 degrees for 10 minutes.
Meanwhile…

Unwrap caramels and combine them with cream in a saucepan over low heat (or in a bowl in the microwave). Stir and cook until completely smooth.  Set aside.

Remove pan from oven and sprinkle chocolate chips evenly over the warm bars. 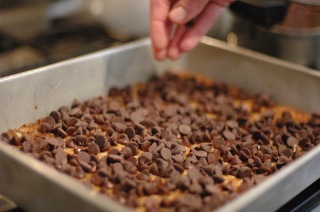 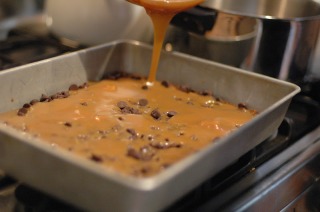 Return to oven and bake an additional 15-20 minutes, until the edges are lightly browned.

Remove from oven and cool completely before cutting. (It’s tempting to not wait, but they really need to be cooled! You can put it in the fridge for a few minutes to help speed this up, if you need). 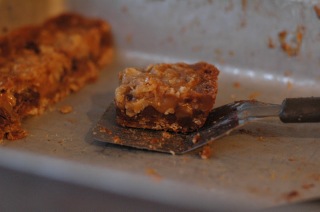 (They are very rich, so slice small!)