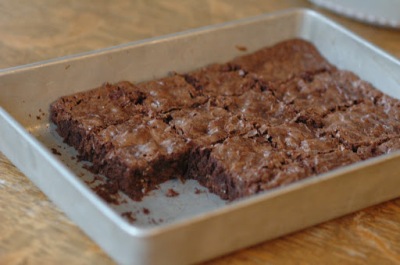 Brownies. Classic. Simple. Yet not so simple.  All brownies were NOT created equal!  In fact, the variance between brownies, in quality and taste, can be vast, yet they all go by the same name of Brownie!  I have realized in the past few years that I have a complex relationship with Brownies.  They are, on one hand, a dessert that I can pass up- if they are tough, or chewy from a box (you know, just add water, plain ole box brownies).  However, when brownies are dense and rich and homemade and fudgy and gooey, I don’t know if there is a dessert I love more.  How could it be?  I try not to be a “brownie snob” but I have been known to ask a brownie-bringer to,  “tell me more about them”, which sounds a little ridiculous as I type out the words!  But my underlying question really is, “are they worth the calories?” Because we know that: 1. all brownies are not created equal and that: 2. they are all full of fat and calories.
I have a great, classic, go-to brownie recipe that I have made for years that I got from my mom.  Cocoa is the source of chocolate in it.  It’s yummy and can be whipped up in a jiffy.  However,  a couple of years ago, my friend Lane emailed me this recipe with the subject line  “the just right brownie”.  We are always searching for the “just right” recipes. And she found it with this one.  (You need to check out her beautiful, inspiring blog-Apron Days) 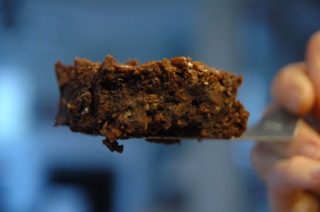 Well, just right it is!  It is made with 4 cups of chocolate chips; 2 cups melted into loads of melted butter and sugar and 2 cups stirred into the batter with the dry ingredients to evenly distribute.  They are fudgy, oh my goodness, rich and substantial.  I have been making them for the past couple of years as my new go-to brownie and playing around with mix-ins, toppings, etc. 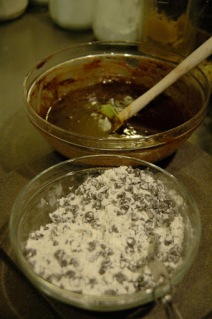 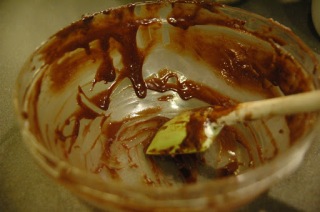 And I must speak to brownie batter since it is one of Dave’s favorite things on the planet!  Because it is full of raw eggs, Dave gets dibs on it (I don’t want to give it to my kids).  So he doesn’t even have to play rock/scissors/paper to determine the bowl/beater/spoon licker.  Last year for his birthday he asked for brownie batter for his cake.  Really? Wierd.  So I made a smaller pan of brownies and the rest of the batter was served in a bowl. He loves the gritty sugar texture and the rich chocolate.  When he sees me reaching for the rubber spatula (his enemy) to scrape the bowl he says, “Really? Do you have to scrape it with the rubber spatula?”  It is much too thorough and leaves far too little for him. 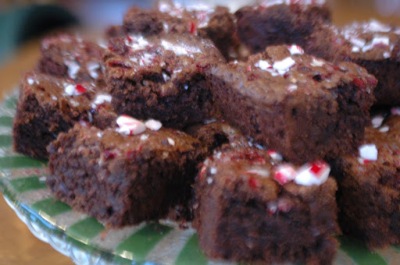 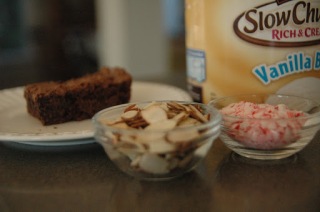 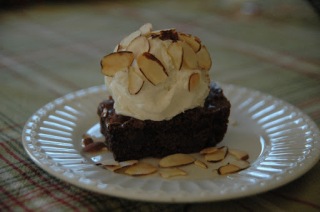 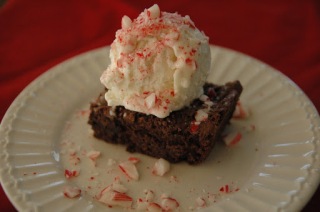 Brownies.  So much to say about them!  I love that brownies are just about perfect with ice cream and hot fudge and yet they pack great for a road trip, and are versatile when adding toppings and layers.  Happy baking!
The Just-Right Brownie
2/3 cup butter (11 Tbsp)
1 1⁄4 cup sugar
1⁄4 cup water (or you can substitute brewed coffee for a little mocha kick)
4 cups (24oz) semi-sweet chocolate chips, divided
4 eggs
2 tsp vanilla
1 1⁄2 cups flour
1⁄2 tsp baking soda
1⁄2 tsp salt
Preheat oven to 325 degrees. Grease 13×9-inch baking pan
In heavy sauce pan, bring butter, sugar, water to boil, stirring until butter is melted and sugar dissolved
(or do this in the microwave).
Remove from heat and stir in 2 cups of the chocolate chips until all are melted. Cool a bit, then add vanilla.
In large mixing bowl, whisk eggs, then gradually add the chocolate mix, stirring with spoon until entirely mixed.  In another bowl, mix flour, baking soda and salt, followed by the rest of the chocolate chips, until combined. Finally, stir the dry into the wet, mixing well.  Spread into the pan and bake for 33-35 minutes until cooked through.  Do not over-bake!

5 thoughts on “the Best Brownies Ever”